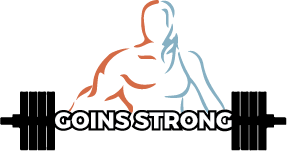 Sugar: How to Win Against this Addictive Assassin

A silent assassin is stalking you every day of your life.

He hides in your pantry.  He’s concealed in your beverage.  He lurks in your food.

His name is SUGAR!!!

Unlike other killers, Sugar does not “end it quickly”.  He likes to watch his victims suffer, slowly, over many years.  He gently drains you of life, hoping you won’t notice until it’s too late.

He zaps your energy, so you are helpless in fighting the extras pounds he added…

If left undeterred, he drives you to become Insulin Resistant…Then BAM…Diabetes!

At this point, he has you right where he wants you.  Dependent on diabetic medication…possibly depressed…and wondering how you got to this point.

He hasn’t stopped yet, though.  He’s out for blood.  He’s adding in a little Heart Disease and cooking up Cancer on the side.

Given that 70% of Americans are considered to be overweight and more than 40% are suspected to fall into the obesity category, it is safe to say Sugar is good at his job.

Now, these statistics are not entirely the fault of individual Americans.  While we are responsible for our own lives, wrong information about diet and nutrition has been pushed for years.  The Food Pyramid said grains and starches should be the base of your diet (How has that turned out?).

1992 was when the Department of Agriculture officially rolled out the Food Pyramid (Hint: Remember this).

Over the last 50+ years, the American diet has relied increasingly on processed foods.  Convenience chosen over nutritional value.  Think back…How often have you eaten fast food or something that came in a box or wrapper in the last month?  How many bowls of cereal have you had?

Is it a coincidence diagnosed Diabetes rates have skyrocketed over the last 50 years?

Take a moment to study the following chart… 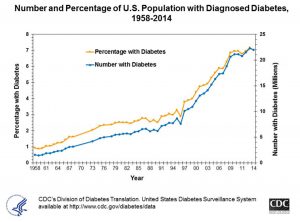 What do you notice? How much have diabetes rates increased since 1958? (look closely)

Per this CDC (Center for Disease Control) report, 1% of the population was diagnosed with diabetes in 1958.

You may have noticed the chart slowly trends upward until the mid 1990’s.  Almost unexplainably, the trend sharply turns upward.  The data shows that Diabetes cases in the US have more than DOUBLED, since 1995.

Are we looking at causation, or simply a unique correlation?

I don’t have the answers, but I unapologetically believe it is a major driver for the increased trend.

I believe this is a case where the “experts got it wrong”!

I suspect the added hype (myth) of eating “low fat” diets in the 90’s provided further fuel for the fire. (subject for another blog post)

I’ll leave open the possibility that, perhaps, some of the increased trend is due to better medical diagnosis.

Regardless of the exact causes, the trend is a ticking timebomb for this country!

How can you evade this killer (Sugar)?  How can you stop him from robbing you of life?

What can you do to avoid becoming a statistic on the above Chart?

How can you WIN against this addictive assassin?

Here’s my strategy in fighting and winning against this thug:

Soda is an obvious ‘killer’ in this case. BUT…

Do you drink any of the following? (Not a complete list)

Contrary to popular belief, Juice is no better than a soda.  If fact, they often contain more

This one life change is the most powerful way to take back control, and beat the Sugar demon.

Bread (any variety), cereal, crackers, other items from a ‘box’…

Some natural starchy carbs like rice, sweet potatoes, beans, etc. are fine; but should

be consumed in moderation.  Enough to support energy levels, but not much else.

Do this on most days.  Then give yourself some leeway to have some bad foods you love on occasion (maybe just a few times a week, instead of everyday).

Make it a habit, and find a way to make it sustainable!  Find the healthy foods that YOU enjoy and eat them often.  Don’t force yourself to eat brussel sprouts if you absolutely hate them (this would not be sustainable).

THAT IS IT!  A 2-step blue print to defeat that silent killer.

By making these 2 changes in your life, YOU are on your way to a long and dominating life!

This killer will move on to someone else, once he realizes you are not a weak target.  He no longer stands a chance against you…because you have exercised your 2nd Amendment right to protect yourself!

If you find this information useful, SHARE to help spread the message!

About the Author: Bradley Goins

Bradley is a husband and father. An Electrical Engineer by degree. He is an Owner/Trainer at Goins Strong Fitness with 15+ years of experience in various areas of Health and Fitness.